Sexual Abuse & Sexual Violence Awareness Week – if you are a victim, speak out says Sharon

Ayrshire MSP Sharon Dowey has expressed her support for #ITSNOTOK campaign as part of Sexual Abuse & Sexual Violence Awareness Week. The week encourages individuals and organisations to amplify all voices of victims and highlights support services that are available to them.

A poll carried out by YouGov in March 2020 for UN Women found alarming statistics when it came to sexual abuse among women in the UK. 71% of women of all ages in the UK have experienced some form of sexual harassment in a public space. This number is even higher among the 18-24-year-olds. This poll highlights two main reasons why women tend to not report these incidents; “I didn’t think the incident was serious enough to report” (55%) and “I didn’t think reporting it would help” (45%).

Alongside Police Scotland, there are many organisations that offer support services for victims. These include Rape Crisis Scotland, Scottish Women’s Rights Centre, Victim Support Scotland, or SupportLine.

“The rise of sexual crimes in East Ayrshire is really concerning, especially when statistics show similar increases across other councils. Any form of sexual abuse, violence and harassment is always unacceptable.

“East Ayrshire has seen a 20% increase of sexual crimes between 2019-20 and 2020-21. This is very alarming as it is the highest figure recorded in East Ayrshire in the last decade.

“Victim support services continue to call for more funding as they are often not able to fully offer their services in all areas of Scotland. The SNP Government needs to prioritise victims over perpetrators.

“The Scottish Conservatives have launched a consultation for our new Victim’s Law bill, which aims to put victims of crime at the heart of the Scottish justice system. Victims have had enough of the SNP’s soft-touch justice.

“The SNP Government must step up its efforts in supporting the victims and we must all play our part in eliminating sexual violence. That’s why I’m supporting this campaign and I would encourage everyone to do the same

“Sexual violence and sexual abuse are terrible crimes which often come with long-lasting physical and psychological consequences for the victims. You are not alone. Please don’t be afraid to ask for help. You can contact any support service that is available to you or try finding the courage to talk to someone around you.” 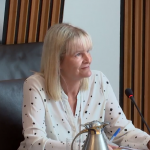 Sharon worked in Ayr at Morrisons supermarket chain for over 30 years - she reached the position of a senior manager.
She left her position after being elected into the Scottish Parliament in May 2021.

There are lots of ways to get involved with your local Conservative Association.

If you have printing facilities, you can print out our membership form and post it directly.

Go to Our Membership Form

Transport Secretary Grant Shapps on building a railway fit for the future.