Scottish Conservative and Unionist Councillor Tom Cook has encouraged local people to
respond to a proposed bill to crack down on the scourge of fly-tipping.
Councillor Cook’s call comes after his party colleague Murdo Fraser launched his
consultation on his Member’s Bill on the subject.
Mr Fraser is aiming to significantly improve on current legislation in relation to fly-tipping
which dates back to 1990. His bill is being backed by organisations including NFU Scotland
and Scottish Land &amp; Estates.
The bill seeks to increase sanctions for fly-tipping, including by lifting the current fixed-
penalty notice of £200, improve data collection of incidents and guarantee the person on
whose land waste is disposed of is not responsible for its removal.
He is also proposing a strict liability, which would mean the generator of the waste would be
responsible for clearing it up and paying any fines.
Councillor Cook wants as many people as possible to make their feelings known during the
consultation period which runs until May 23.
Scottish Conservative and Unionist Councillor Tom Cook said: “I am pleased to be
backing my colleague Murdo Fraser’s plans to crack down on fly-tipping.
“All too often fly-tipping is a scourge on our beautiful landscape and communities in East
Ayrshire
“It is completely selfish and unacceptable to dump waste at unauthorised locations. It is the
public, landowners and East Ayrshire Council who are left to pick up the pieces.
“This new bill is essential for strengthening current laws against fly-tipping which stretch
back decades.
“I would encourage everyone in East Ayrshire to get involved during the consultation
process in the coming weeks and months and make their feelings known.
“I also hope that this sensible piece of legislation will secure cross-party backing from MSPs
in the Scottish Parliament.” 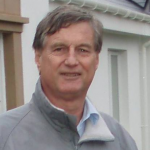 Tom was born in Dumfries but has lived in Ayrshire since 1974.

He began his engineering career with SSEB and subsequently Scottish Power, becoming a Senior Manager prior to his retirement.

Transport Secretary Grant Shapps on building a railway fit for the future.